How many cycles are too many?

The official answer is 165,000 cycles per year is too much.  That’s true and facetious at the same time, but just when we thought we’ve seen most of the reasons for short cycling, we now have one more to add to the list.  In this article you’ll see how a temperature control short cut done to make up for the lack of a defrost cycle clock led to a setup that caused this Heatcraft HyperCore walk-in condenser unit to cycle about 9,900 times more per month than it should have.

Key Concepts:
- Short cycling can be caused by a number of problems, control design being one of them.
– Fixing detrimental operational behaviors can add years of life to a machine and save maintenance problems in the meantime.

At this point it would be very hard for us or the customer to know when this bad control setup happened since no monitoring had been done with the condenser unit and the walk-in cooler itself had not lost control of the temperature.  It’s quite likely they may have inherited this condenser and evaporator unit set up when they leased the space.  But let’s back up.

When we started monitoring this unit back in August we knew right away that it was short cycling.  This is the first full day of monitoring and it was cycling over 400 per day.

Notice how dark the chart gets.  When you see more dark than light area in the chart you not only have a lot of run time, you also have a lot of cycles as the graph is showing.  It’s quite easy to visualize this fault without the benefit of Virtjoule’s automated alerts on cycle maximums.

This is the chart of a different Heatcraft HyperCore that we’re monitoring and it’s prototypical of what we see with most walk-in condenser units.  It’s quickly apparent that this unit is not cycling as many times as the one above.

Is it time to make the call?

When do you know it’s time to call someone to repair the machine?  They had not lost control of the temperature in the cooler.  In this case it really is a business decision since there is no imminent crisis.  But consider this, a newly installed compressor for a Heatcraft Hypercore has cost this customer $2,200 on a different unit.  They do have a serious financial incentive to avoid a $2,200 replacement and whatever interruption it causes to their business or distraction it creates for their store managers.

I consulted with a local commercial HVAC and refrigeration company in Boulder County, Timberline Mechanical.  Timberline does commercial HVAC and refrigeration for some of the larger food manufacturers in Boulder County.  Founder and president, John Kuepper, was able to validate that this behavior is detrimental.  One of their rules-of-thumb is that if a machine is cycling more than five times per hour then it’s short cycling.  If it’s cycling six times an hour then it’s probably not worth a trip.

In this case this unit was cycling 18-20 times per hour.  It was turning on for about a minute and shutting down for about two minutes before coming back on again.  Start-to-start cycle times were averaging about three minutes and runtimes during the cycle were averaging about a minute.  Timberline is saying that start-to-start cycle times shouldn’t really go much less than 12 minutes.

With that rule-of-thumb in mind, this condenser unit was cycling four times more than it should have been.

What does it mean to the owner/operator of this unit?

This unit might continue to operate for quite a while into the future without needing a repair, but when it does it’s going to be a huge bill.  It’s quite possible that if this unit was cycling normally that the customer may never have to replace the compressor while they’re leasing the space.  While under their lease they are contractually responsible for maintenance and anything that happens to those machines.  A 10 year lifetime machine is reduced to just two to three years, easily within the time span of a commercial lease.  If they have inherited this machine with time already on it, the expensive failure could come at any time and would be their problem, not the landlord or the previous operator.

Enough with the suspense of what was actually happening.  Timberline Mechanical was called to take a look after the current service had just given the unit a clean bill of health after months of this behavior while Virtjoule was still saying it was short cycling.  What was found was hair raising for any refrigeration technician.  This unit did not have a thermostat or defrost clock installed.  Instead someone had gotten a Johnson Controls bulb thermostat, set the set point to 35 degrees and then embedded it into the evaporator part of the split system in the cooler.  The idea was as soon as it got cooler than 35 degrees it would shut down the evaporator.

I don’t know where to start with this one.  It worked only because the condenser unit was still running well.  It worked only because it was an extremely clumsy and inefficient way of getting what amounted to a nearly continuous defrost cycle.  Of course this worked at the expense of a very expensive compressor.  Timberline had a more colorful opinion of this approach.  Do we even need to speculate that there could be many more installations like this?

But why the short cycle?

Let’s go deeper into why this caused a short cycle.  First and foremost, in a medium temperature cooler you might try to hold temperature in the cooler at 38 degrees.  To achieve 38 degree temperatures, temperatures out of the evaporator would have to be about 20 to 24 degrees.  If this poor man’s defrost cycle thermostat is sitting in the evaporator set at a cutout setpoint of 35 degrees then 20-24 degree cooler air is going to satisfy that set point really fast.  The evaporator will only be on for a little while.

20-24 degree evaporator air is blowing on the embedded thermostat set at 35 degrees.  It is satisfied quickly and the evaporator is cut off.  Let’s say 38-40 degree walk-in air continues to circulate through the evaporator.  At some point the thermostat will notice it’s more than 35 degrees and the evaporator comes back on.  The condenser unit on the roof is still working correctly as is the evaporator itself and cold air is coming out which is why they never lost temperature control.  The store manager is happy because there is no health problem.  But that cold air quickly satisfies the thermostat and everything shuts down again.  It’s a nasty short cycle that has continued, perhaps, for the entire life of this unit.  The people who pay the bills long term should care a lot about this behavior.

What needs to happen here is to install a basic control system of thermostat and defrost cycle clock in the cooler, not a simple thermostat buried in the evaporator.

This unit was built with a good refrigeration system.  Heatcraft HyperCores, in our experience, have been some of the most reliable condenser units we’ve monitored which was part of the reason this setup poked out like a sore thumb.  The design of this system did not include a thermostat in the cooler with a defrost clock in series to manage a proper defrost cycle.  There was a very bad choice made by the installation technician(s) that short cut basic refrigeration control design.

We may never know the real reason this unit was designed without the proper temperature and defrost controls, or for that matter how many more installations there are like this one.  However, with the current setup the customer could have to replace a compressor prematurely only to have to do it again and again, perhaps even blaming Heatcraft products, and never know why they have such a lemon.  The lemon in this case was the control design which affected everything about how the system operated.

Virtjoule was quickly able to pinpoint the short cycling behavior of this unit and fixing it could easily add years to the lifespan of this machine, avoiding large expenses, compared to its previous operation. 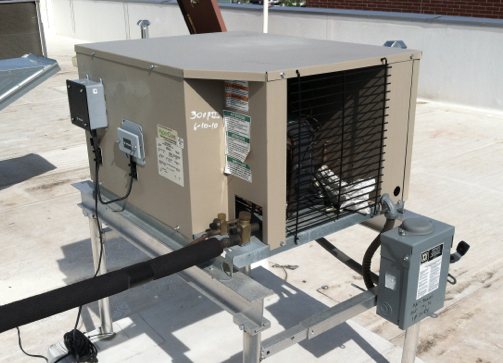