If there’s one thing that we know for sure when monitoring for refrigeration failures, it’s that finding behavior changes in the compressors or condenser unit will give you hours, if not days, of notice that your equipment needs attention…before you’ve lost control of the temperature of your walk-in or refrigerator or freezer cases.

In this article, we’ll cover a recent shutdown of a bank of two large Copeland compressors that served a low temperature refrigeration circuit at Niwot Market, Niwot, CO.  Notice was given to the owner, Bert Steele, within minutes, well before he knew that anything was wrong, giving him time to correct the problem before there were any temperature problems in the freezer cases.

Niwot Market is an independent small grocery store in the town of Niwot outside of Boulder, CO.  It is owned and operated by Bert Steele.  The market has two refrigeration circuits in the store.  One for low temperature freezer cases and ice cream and one for medium temperature refrigeration cases for products like meat, milk, and produce.

If there is one thing Bert worries about it’s an unexpected failure of either of those refrigeration systems.  With enough lead time on the problem, he can move frozen products to his back room walk-in freezer which has more capacity to stay cold for hours while the problem is getting fixed.  If he doesn’t get that lead time, several large display cases of food are at risk of total loss.

Failures tend to be in two categories, power failures and compressor failures.  Weather in Colorado can be unpredictable and violent.  Afternoon thunderstorms can take out the electricity for minutes to hours at a time.  Winds in the area can exceed 80 mph several times a year, often occurring at night time after the market has closed, and he can lose electricity for several hours.  Although this particular case did not represent a power failure across the whole store, it was a type of power failure in the low temperature compressors that caused the problem.

Below is a picture of the compressor rack for the low temperature system.  It has three Copeland compressors.  The one on the right is permanently out of service and not needed due to lower demands on refrigeration as Bert has updated his units in the store. 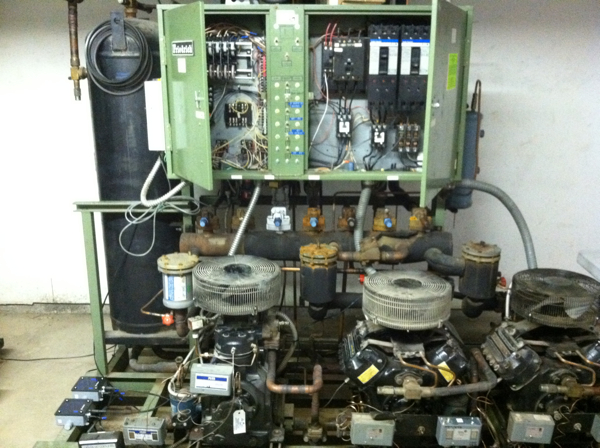 You’d think this might be an April Fools prank it it were not such a serious problem.  Right before 8 am on April 1st, the low temperature compressor rack shut down after running continuously for months.

Virtjoule’s servers were monitoring this with automated rules that required that in the previous 25 minutes that the compressors had to have run for at least 10 minutes.  Soon after 8 am the Virtjoule alert was sent out.  Since a non-operation fault is pretty rare, I looked at the charts and it was clear that both compressors had shut down.  It was highly unlikely to be a sensor error since both sensors were reporting the same thing.  There were no other good explanations except that the units had shut down.

I gave Bert a call on his cell phone and then at the store where I reached him.  I explained the situation and he said he would go check on things.  I got a call back at 8:28 am from Bert saying he thought things were okay.  He had put his hand into the freezer cases and the fans were still running and cool was still coming out.  The fact that the compressors had shut down had not quite reached the freezer case yet, but it’s a great example of the fact that a serious problem had not yet surfaced on a temperature probe.

I was a bit puzzled since nothing would explain why the readings flatlined near zero.  Fortunately Bert decided to go on down to the basement where the compressor racks are and check the source.  Sure enough, I got a call at 8:40 from him saying that the compressors had shut down.  He was able to reset them and they have been running ever since.

Bert’s comment at the time was, “You just paid for yourself for the next three years.”

It was obviously very gratifying to hear that and stories like this make all the work we’ve put into the company very worthwhile.  Whether it’s a story of saving thousands of hours of HVAC time, energy, and money, or helping a small grocery avoid a very expensive loss of products, we really get a kick out of helping businesses find these very tangible problems.