It’s hard to imagine where control of our indoor environments would be without the lowly thermostat. Programmable thermostats have been a mainstay of both commercial and residential heating and cooling.  But like the VCR “Blinking Twelve Problem”, the proliferation of thermostat interfaces has caused many to be completely misunderstood.  Property owners and tenants ignore the thermostat to their own detriment.

This article discusses a client who was heating and cooling 24/7 on two of their Carrier HVAC units for a retail store in a small strip mall.  The cause was mis-programmed Carrier Debonair thermostats.  They had no idea.  Without the HVAC monitoring capability of Virtjoule, this condition may have gone unnoticed for years.

Upon properly programming the thermostat, the units are now running just 12% of the time they were running before.

Carrier is a big and trusted name in HVAC, without a doubt.  But that hasn’t solved the problem of complex programming interfaces for mere mortals.  I have a 29+ year career working with computers and the interfaces on most thermostats can still be mind boggling.  This store was using a Carrier Debonair thermostat.  Within the Debonar lineup there are no less than 10 models to choose from.  The model our client had was similar to this one: 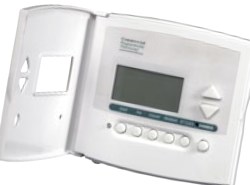 Since this client was very close to where I live, I took the opportunity to go check on it myself.  First thing I did was to go on the Internet and find the owners manual for this model.  I was able to find it here:

As is often the case, I was expecting that there would be some schedule problem or perhaps a misunderstanding about what happens when the fan mode is set to “On”.  After all, we’ve seen that there is no predicting what the blower is actually doing when the heating and cooling mode is set to “Off” or even “Auto”.  We’ve seen blowers continue to run when the thermostat mode is set to “Off” and it is thermostat dependent.  Very counter intuitive, but who is going to go on the roof or hold a tissue in the air stream to notice if the blower is running after you shut down for the night?

What I found on this thermostat is that it has three different occupancy programming modes.  The first and default mode, Occupancy 1, has the unique feature that the occupancy schedule can be overridden by a light sensor.  That was a red flag to me as that means the thermostat was depending on yet another sensor which might or might not be working, rather than the building schedule that it also contains.  It could also be getting confused by other inputs like street lights through windows and start times would change radically depending on what time of year it was.  Why would you want that if the building hours are nearly identical throughout the year?

Without enough time or a good way to determine if the light sensor was working, it was clear to me that a retail establishment like this should not be depending on light to control its space.

Switching the thermostat to “Occupancy 2″ mode allowed it to be controlled by the occupancy schedule.  On this thermostat each day has occupancy times and unoccupied times.  Luckily there is a feature that allows you to copy one day to the next, but how you do that is completely inscrutable if all you had was your eyes on the thermostat.  It took some careful reading of the owners manual to figure that out.  By the way, where do you think the owners manual was on site?  I don’t know either.

Besides the occupancy mode issue, both thermostats had their time and day set wrong.  In the case of this seven day a week establishment, having the day set wrong was harmless.  But here in February, both clocks were still set to daylight saving time.

Let’s take a look at the results.  During this time the temperatures here in Colorado were temperate with daytime highs in the 40′s and 50′s and lows in the mid-20′s.  The first image is a typical daily runtime graph of one of the units before the thermostat change.  The blower was running 24/7 punctuated by cycles of heat.  There was simply no schedule on this unit and it was always running.

The “after” chart is one that is much easier on the eyes.  You can see some periodic runtime during the night when the setback temperature of 58 was hit.  But by late morning there was no runtime at all.  So not only was the tenant saving night time and after hours runtime, the majority of their savings was actually achieved during business hours when outside air and activity in the building was working for them.

Across the two units, I was able to compute that total runtime after the thermostat change was just 12% of what it was before.  That’s what you call saving money.  Without HVAC monitoring of these units, this money would have been wasted month after month.