Summary
An economizer is a set of controls and dampers, usually fitted to a rooftop package unit, that can allow variable amounts of outside air into the system to supply cooling when outside air temperatures allow. This is an energy saving tactic to take advantage of “free cooling” by using cool outside air rather than running compressors and the refrigeration circuit.

With Virtjoule’s economizer opportunity metrics you can discover the following issues and opportunities:
– Identify units with economizers running refrigeration circuits when they could be cooling from outside air instead
– Compute the potential savings for an existing unit to have an economizer installed or be replaced with a unit that has a built-in economizer
– Find the total amount of time the outside environment spent below a certain temperature threshold.

An economizer is one of the most misunderstood HVAC components there is.  They can be complex, prone to failure, and controlled improperly.  What starts off to be an energy and money saving device can turn into an achilles heel of extra equipment expense, maintenance costs, and lost energy saving opportunities.

In an excellent case study recently published by the Western Cooling Efficiency Center (WCEC) at UC Davis, Davis, CA, economizer faults made up two of the top 10 most common HVAC faults.

We especially like this paper because the Virtjoule sensor got a front page picture and we were included in a feature roundup of fault detection products.  I would encourage you to take a look at the paper where Kristin Heinemeier reviews the state of standards development for fault detection, particularly as it relates to California Title 24 initiatives. 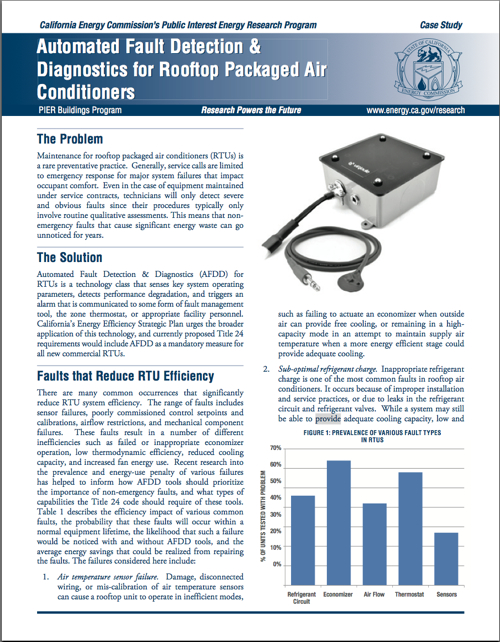 According to the WCEC report, the two main economizer failures are incorrect or sub-optimal set point and economizer damper failure.

The WCEC and CA Title 24 recommend a 75 degree set point.  That means that when outside air temperature is 75 degrees or less, the dampers for the economizer should be coming open.

There is a huge range of capability with economizers.  Some are completely manual where a building technician will manually adjust the outside air damper to a certain degree.  But to be useful, the damper position should be able to be automatically set by economizer controls.

A 75 degree set point makes sense in the dry climate of California, but there is this thing called enthalpy that affects how much good you can get out of air with a certain humidity and temperature.  It turns out that the usefulness of cool outside air goes down when the humidity of that air goes up.  That’s because enthalpy, or the total amount of heat in that air, is higher at higher humidities.

Because humidity is a measure of how much water is in gaseous form, there is extra heat content in air that has higher humidity due to the latent heat required to hold water in a gaseous form.  That heat is in addition to the sensible heat, the heat you can feel, in the air, raising the total enthalpy and heat content of the air making it harder to cool.  There is no linear relationship between temperature, humidity, and enthalpy.  It has to be experimentally determined and is the focus of the engineering field of psychrometrics  (not psychometrics…another topic, another blog).

An economizer failure will show up in a couple of ways in run time statistics that Virtjoule provides.  If the economizer is stuck closed or the set point is set too low, then Virtjoule will see compressor run time at temperatures below the desired set point.  If the economizer is stuck open, then on warm days the run time of the unit will be longer than normal for a given condition because warmer air than is called for is being fed into the RTU.  Both ends of the failure spectrum can be noticed.  What is more subtle, and something we are not chasing at this time, is figuring out whether the compressors and economizer are working together to create an optimal mix and the subtle degradations that might be shown with more specific gauges.

Let’s look at an example.  The following graph shows compressor cycles for a 40 ton McQuay on an executive office building in San Diego.  The accompanying temperature chart shows the temperature trend throughout the day.

As you can see, a significant amount of compressor time was used for cooling for several hours between 9:00 am and noon and again after 3 pm.  And that’s time when it was below 55 degrees.  Humidity levels were 45-55% during that time.  Most HVAC people will tell you that humidity doesn’t make much difference at temperatures below 55 degrees and so computing enthalpy is a waste of time…just use the air less than 55 degrees to cool all you can.

These McQuays are fitted with economizer capability.  It looks to us like it’s not being used or controlled incorrectly as outside air temperature peaked at 57 degrees and most of the day was at 55 degrees or below.  There should have been ample cool air to supply cooling for most of the day.  Given that California recommendations are to use the economizer up to 75 degrees, minimizing compressor time, it looks like a lost energy and money saving opportunity.

In tables in the Virtjoule web application, we’ve tallied 6 hrs 16 minutes of compressor time on this unit this week.  It hasn’t been too warm in San Diego this week.  But we’ve also tallied 5 hrs and 18 minutes of compressor time when the temperature was below 55 degrees.  85% of the compressor run time this week has been at the same time outside air temperature was 55 degrees or less.  It’s almost certain the economizer is not paying for itself and could use a call to check the set point, temperature and humidity sensors, and the physical operation of the dampers at various levels.

In summary, new analytics functionality in Virtjoule makes it possible to identify lost opportunities to save money and energy for machines with economizers.  It’s also possible to use this same functionality to evaluate the potential benefit if retrofitting an economizer or replacing a machine by monitoring the cooling behavior of a machine when temperatures are less than 55 degrees.